Vancouver, B.C. – We all have the power to be a mental health role model and positively impact Canada’s mental health landscape. That’s the message from the Canadian Mental Health Association (CMHA) as it gears up to host its annual Ride Don’t Hide event, Canada’s largest mental health bike ride, taking place in more than 30 communities across the country from Newfoundland to British Columbia on June 25.

A 2015 study reported that 26.3% of Canadians aged 15 and older with a mental health condition indicated that there was a time in the last year when they needed mental health care but did not receive it. In fact, as many as 60 per cent of Canadians with a mental health problem or illness won’t seek professional help for fear of being labeled or stigmatized. This is a huge problem with tens of thousands of people across the country suffering in silence. But imagine if every person who has sought help had the power to motivate another to do the same?

A recent study by the University of Ottawa examined what motivates people to seek mental health support and found that family and friends could be key in motivating those experiencing depression and anxiety to take action. The study, published in the Social Psychiatry and Psychiatric Epidemiology medical journal, suggests that people who were aware that family or friends had sought treatment for mental health or substance abuse were more likely to seek care for themselves. Quite simply: knowing others who have sought help motivates people to do the same.

We know that this is also true of celebrities. With more and more people in the public eye opening up about their personal struggles the discourse around mental health has never been more prominent and evidence shows this has had a positive impact on the public. For example, in April of this year UK mental health charities reported a significant uptake in their services, immediately following Prince Harry’s interview regarding his mental health challenges following the loss of his mother.

However, we don’t have to look as far as Hollywood or Kensington Palace to find inspiration, there are many influencers and role models active within our communities, schools, workplaces and homes who have faced similar challenges. What if they were more vocal about their experiences and shared the benefits of the help they received?

“National awareness raising events such as Ride Don’t Hide play an important role in changing the public’s perceptions and in eliminating the stigma surrounding mental illness,” says Dr. Patrick Smith, CMHA National CEO. “The first and most important hurdle in accessing help is overcoming stigma and admitting you need help. Prevention and recovery are both possible if we prioritize education, early intervention and access to timely treatment”.

Dr. Smith continues: “We are asking Canadians from across the country to ride with us. Mental health for all is our vision, but the process of change happens one pedal at a time and every Canadian has the power to play a role in that process.”

“Talking and sharing is the key to breaking the stigma that has kept mental illness in the shadows. Knowing that we all have the capacity to motivate friends, family, students and fellow community members just by sharing our stories and reaching out for help is very positive and empowering,” says Michael Schratter, founder and spokesperson for Ride Don’t Hide.

This year’s event will see more than ten thousand Canadians from all walks of lives saddling up and joining friends, family, colleagues, classmates and other community members to share their experiences, honour loved ones and pedal towards the ultimate goal of ending the stigma around mental illness.

Rides will take place on June 25 in nine communities across British Columbia: 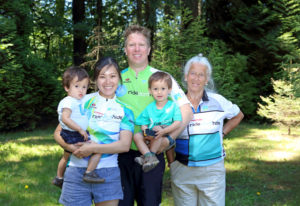 The Ride Don’t Hide movement began when Michael Schratter, a Vancouver school teacher and social columnist living with bipolar disorder, saddled up and spent 18 months cycling 40,000 km around the globe. Armed with only his bike, a knapsack and the determination to realize his dream of raising awareness and empowering those who experience mental illness, his story inspired millions of people and raised $100,000 for CMHA.

Michael first began to experience the symptoms of bipolar disorder during his turbulent high school years and went on to experience a severe depressive episode in college when he was 21 which prompted him to seek help after a suicide attempt. The resulting therapy and medicinal intervention made a huge difference to his wellbeing. Realizing the huge impact this made on his quality of life Michael continued to readily seek help whenever he recognised he was dealing with acute anxiety or emotional lows. To this day, though thankfully seldom needed, he continues to seek help and encourages others to do the same.

Horrified that the shame and stigma associated with mental illness prevented so many people from opening up and seeking the help that could transform their lives and by the portrayal of mental illness in both popular culture and the media Schratter felt compelled to do what he could to break the stigma.

“As a teacher and a part time journalist, it dawned on me that my profession is about creating narratives, stories that offer explanations. And that I had a duty to try and change the story. It was this sense of duty that gave me the courage to come out of hiding and to try and set an example, a counter narrative. It was imperative that the story of mental illness was also being told by average everyday Canadians that were neither dangerous nor homeless. Even more so it was imperative that successful professionals started to come out of hiding to add balance and truth to the destructive stereotypes.” 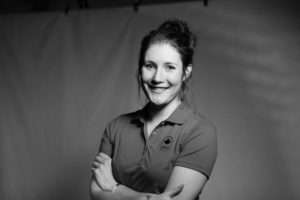 Anastasia Bucsis is a Canadian long track speed skater who has represented Canada at 50 World Cups, six World Championships, as well as competed at the Vancouver 2010 and Sochi 2014 Winter Olympics. Anastasia became involved with Ride Don’t Hide in 2016 after experiencing her own mental health struggles and was motivated to speak up and help encourage others to seek support.

“My diagnosis came twelve months before the Sochi Olympics, and it quite frankly derailed my world. Although it shouldn’t have come as a surprise, I was left feeling confused, alone and utterly helpless. I was left to myself, questioning what seemed to be every decision I had made within the last few years. For a myriad of reasons that seemed to form into a perfect storm, I had dug myself slowly into a trench and recognized that I was too deep to climb out unassisted.”

“As an athlete, it is hardwired in your brain to think ‘better, faster, stronger’ – no one wants to admit they are vulnerable which makes it difficult to ask for help. It was also hard for me to accept that I couldn’t ‘fix’ the situation on my own. But there was relief in receiving the diagnosis, that indeed, I was suffering from clinical depression and not just feeling sorry for myself.”

“It was with that realization that I truly began to recognize the importance of accepting the need to ask for help, coupled with surrounding myself with a strong and balanced community in my pursuit of bettering my mental health. The upcoming Ride Don’t Hide event is the perfect example of people coming together while creating a strong network of a safe space and positive discussion regarding mental health issues.”

Ride Don’t Hide is open to cyclists of all ages and skill levels. Individuals, families and teams can register online at www.ridedonthide.com.

**Ride ambassadors, participants and spokespeople in communities across six provinces available for interview upon request**

About Ride Don’t Hide
Ride Don’t Hide is an annual fundraiser hosted by the Canadian Mental Health Association (CMHA) in celebration and support of mental health for all, with the goal of ending the stigma around mental illness. First launched with Michael Schratter’s 40,000 km ride around the globe in 2010, Ride Don’t Hide is a growing national movement with community bike rides in more than 30 communities across BC, Alberta, Saskatchewan, Manitoba, Ontario and Newfoundland and Labrador. This year CMHA aims to engage more than 10,000 participants and raise $1,700,000 for mental health programs. Join the movement and find your local community ride at www.ridedonthide.com.

About the Canadian Mental Health Association (CMHA)
Founded in 1918, the Canadian Mental Health Association (CMHA) is the most established, most extensive community mental health organization in Canada. Through a presence in hundreds of neighbourhoods across every province, CMHA provides advocacy and resources that help to prevent mental health problems and illnesses, support recovery and resilience, and enable all Canadians to flourish and thrive. Visit the CMHA website at www.cmha.ca.