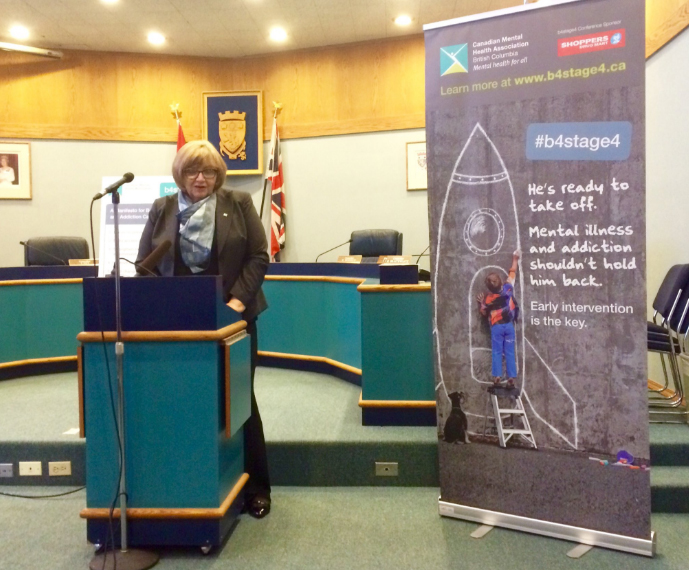 The manifesto is a call to action for people in the Greater Victoria area and province-wide to endorse CMHA’s recommendations for mental health and physical health to be valued equally. The manifesto demands an increased focus on early intervention and prevention and on building a standardized, compassionate, and evidence-based system of care, for people living with addictions problems.

Addictions problems and attempts to tackle a fentanyl-fuelled public health emergency are a rapidly growing area of concern in BC. So far this year there have been 555 apparent substance use overdose deaths in the province, a 60.9% increase from 2015. Victoria has the third-greatest number of overdose deaths in the province, next to Vancouver and Surrey.

“With BC in the midst of an opioid-overdose crisis, there is an urgent need to improve and strengthen mental health and addictions care in the province” says Bev Gutray, CEO of CMHA BC. “British Columbians want and deserve a more robust and responsive system of support. Over 1200 people have signed on to b4stage4 and registered their support for our manifesto since the provincial launch on October 11, 2016 with the greatest support coming from Greater Vancouver and Vancouver Island.”

“We would never knowingly wait until Stage 4 to intervene for cancer; we educate, screen, and take action in the early stages. We need to do the same for mental illness and addictions. b4stage4 is about preventing mental illness and addiction, and for those who are experiencing symptoms, intervening in the early years before people reach a crisis point.”

CMHA is calling on the public to take part in this conversation and support the b4stage4 campaign. British Columbians are encouraged to register their support and sign the manifesto at www.b4stage4.ca.

CMHA BC will also be hosting a b4stage Conference in Victoria on November 28-30 to further explore ways in which the system can be improved. Shoppers Drug Mart, Canada’s largest pharmacy chain, has lent their support to the campaign as sponsor of the conference which will bring together speakers that are both experts in their field and have lived experience of mental health and addiction issues. The Right Honourable Norman Lamb, Member of Parliament, United Kingdom, will be the keynote speaker.

For more information on the conference and to sign up for updates go to www.b4stage4.ca.

About the Canadian Mental Health Association, BC Division (CMHA BC)
CMHA BC is a part of Canada’s most established mental health charity and the nation-wide leader and champion for mental health. CMHA helps people access the resources they need to maintain and improve mental health, build resilience, and support recovery from mental illness. Each year in BC alone, CMHA serves more than 100,000 people all across the province. For mental health and addiction information and resources visit www.cmha.bc.ca.